Imelda Staunton, an Oscar nominee, was not flattered when a friend first suggested she would be perfect for the part of Harry Potter's first female nemesis, Dolores Umbridge. 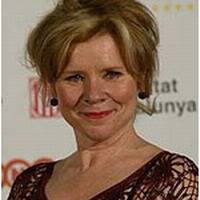 "I read the book, and Umbridge is described as a short, ugly, toadlike woman," Staunton told Newsweek. "I thought, 'Oh, thanks very much."'

But Staunton ended up playing the villainess as an "apple-cheeked schoolmarm - drenched in pink angora," the magazine says. In "Harry Potter and the Order of the Phoenix," the fifth movie based on the J.K. Rowling series, Umbridge is a new teacher at Hogwarts School of Witchcraft and Wizardry bent on restricting free thought.

"There can't be any mess or individuality," Staunton said. "But, of course, that leads to brainwashed people."

Staunton, who was nominated for a best-actress Academy Award for playing Vera Drake in the eponymous 2004 movie, says the Potter role is no joke.

"You may think that it's just a bunch of hand-waving, but there's a lot of proper acting going on," she said.

Emma Watson, who plays Hermione, has decided to continue in the final two films, Newsweek said.

"Harry Potter and the Order of the Phoenix" is to be released July 13.