Gays struggle to find their voice at black colleges

So lured was April Maxwell by the promise of the black college experience that she enrolled at Hampton University in 2001 without even visiting the campus. 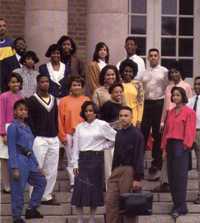 Gays struggle to find their voice at black colleges

A lesbian who is open about her sexual orientation, she arrived eager to join the extended Hampton family.

Instead, "I felt like I was the only gay person on campus  it seemed like nobody was really out," said the now 24-year-old Maxwell.

She channeled her isolation into organizing a gay support group, but a panel of students and faculty denied it a charter. The panel recently denied a second attempt at chartering Students Promoting Equal Action and Knowledge, or SPEAK, headed by underclassmen after Maxwell graduated.

It is a tug-of-war that's emerging at other black schools, where students say outdated rules and homophobia block them from forming the gay campus voice common at majority white institutions.

At Hampton, where rules govern everything from overnight guests to student dress, officials insist they do not discriminate against gays. They say they are simply enforcing the regulations on student groups, and there just is not space for another one.

But some students here see more than a conservative approach to the regulations. They, and many others at the nation's more than 100 historically black colleges and universities, say that a broader suspicion of homosexuality keeps gays in the shadows at these tradition-heavy schools.

"You've got to recognize the history of HBCUs," said Larry Curtis, vice president for student affairs at Norfolk State University, where students recently formed a gay-straight alliance. "Most of them were founded by religious organizations."

Church leaders are often cited as setting the tone regarding homosexuality across the black community.

Nationwide, black pastors have opposed gay marriage and shot down comparisons between the struggles for civil rights and gay rights; others have attacked "down low" bisexual men for contributing to the rising AIDS rates among black women, though the topic is a matter of debate in the public health community.

"It's kind of hard to be out on campus and still be successful," said Vincent Allen Jr., head of Safe Space at Atlanta's Morehouse College. "As an out gay man, if I wanted to pledge, that door is pretty much shut to me. That's just the way it is."

But just as gay students can rightfully request campus inclusion, so too can black college administrators deny it, argued the Rev. William Owens, an HBCU graduate and head of the Coalition of African-American Pastors in Memphis, Tennessee.

Those administrators may cite the Bible, or simply personal beliefs _ and they do not have to be politically correct, Owens said.

"They can say 'no' and I don't think they have to give a lot of reasons," said Owens, who joined other black pastors worried that, along with dismal marriage rates, socially accepted homosexuality "is a threat to the black family."

In 2002, the issue of gays on black campuses grabbed the attention of the Human Rights Campaign, an advocacy group that organizes annual "coming out" days.

"We would send out information to all the colleges and universities about getting national coming out packets, and for some reason the only institutions they were not hearing back from at all were the historically black colleges," said the group's diversity manager Brandon Braud, who began calling campuses.

He later spoke to students alleging outright hostility. Some were required to find an adviser to form gay groups _ unrealistic on many small campuses, Nashville AIDS educator Dwayne Jenkins said.

"Finding an adviser was always hard because nobody wanted to be associated with the gay-straight alliance _ it was the thinking that 'Oh my god, are they going to think I'm gay?"' he said.

The most esteemed schools earned a reputation for students with impeccable manners and clean-cut behavior.

"So much of our campus is focused on this ideal of 'the Hampton man' and 'the Hampton woman,"' said Michael, a transfer student and SPEAK member who, like the group's president, is closeted and refused to let his last name be printed. "Men walk women home _ traditional Southern values."

But students are changing.

The Gay, Lesbian and Straight Education Network counts more than 3,000 gay-straight alliances at American high schools. Those youth will apply to colleges that can ensure their safety and will provide support, said Kevin Rome, vice president for student services at Morehouse, where a student was beaten in 2002 for an alleged same-sex pass.

"Our schools have to accommodate. It's inevitable."

Virginia Tech's gay alliance group hosts support meetings and social outings. The University of Virginia recently hired a coordinator for its gay resource center, a hub for 2,000 gay students at the Charlottesville campus.

At historically black schools, change is gradual. Braud has nudged along groups at 20 schools through a special black college-aimed Human Rights Campaign program.

At state-supported institutions such as Norfolk State, Curtis said it's easier to prompt change because other state universities in Virginia already have gay support groups.

At private Hampton, April Maxwell said she knew lots of gays and found support among pockets of students, regardless of sexuality.

"The people who are in charge, I really don't think they're for it," Maxwell said.

But school officials say competition is stiff on campus, where a moratorium has limited the number of student groups to 90 _ and unchartered groups can't meet. New groups are chartered when other groups become inactive.

Only four spots were available during the 2006-07 school year. Forty-four organizations have applied for charters over the last two years, and 11 received them.

"No organization is given any type of special treatment," said Assistant Vice President for Student Affairs Barbara Inman. "The university doesn't have a position on gay and lesbian faculty and staff members."