Christians around the world marked Good Friday with prayer, processions and pleas for peace. 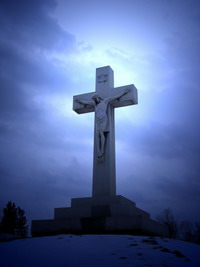 In Jerusalem, thousands of pilgrims, some carrying large wooden crosses and others holding candles, wound their way through the narrow lanes of the Old City, retracing the route the Bible says Jesus took on the way to his crucifixion.

Seven penitents in the northern Philippine village of San Pedro Cutud took the reenactment to another level, when they were nailed to crosses in an annual rite that is frowned upon by religious leaders but has become a major spectator attraction.

And at the Vatican, Pope Benedict XVI kissed the foot of a wooden sculpture of Jesus on the cross during a ceremony at St. Peter's Basilica that included a long meditation read by the official Vatican preacher.

A few hours later, Benedict was scheduled to head across Rome to the Colosseum, for the traditional Way of the Cross procession. The Vatican said the 79-year-old pontiff would carry the cross at the beginning and end of the solemn evening procession at the ancient Roman arena.

On Jerusalem's Via Dolorosa - or Way of Sorrows - visitors from the United States, India, South Korea, the Philippines, Russia and many other countries followed the traditional route of Christ's final walk - stopping at 14 stations along the route, each marking an event that befell Jesus on the way to his death.

The final five stations are inside the Church of the Holy Sepulcher, where tradition says Jesus was stripped, crucified, and finally laid to rest before being resurrected on Easter Sunday.

In a re-enactment of those last hours, a Korean pilgrim played the role of Jesus, wearing a crown of thorns, dragging a cross and covered with fake blood. He was escorted by other pilgrims dressed as Roman legionaries.

Bob Payton of Orange County, California, playing the part of a Roman soldier, said this was his third Good Friday visit. "The Lord moves us to come here," he said.

Israeli police did not give an exact figure for attendance saying only that "thousands" took part.

In his traditional Good Friday message, Latin Patriarch Michel Sabbah, head of the Roman Catholic Church in the Holy Land, appealed to politicians of all faiths to bring an end to the region's ongoing violence.

"What's happening now, in our Holy Land here, is believers in God killing each other in the name of God; Jews Muslims, Christians," he said. "We hope, we wish, for political leaders who will have the courage to go and find the right ways for peace."

Easter this year falls during the weeklong Jewish festival of Passover, bringing thousands of Jews into the cramped Old City to worship at the Western Wall, Judaism's holiest site.

Catholic pilgrim Michael Murphy, a San Francisco native who now lives in Paris, said being in Jerusalem alongside members of other religions was a moving experience.

"It's a sign of hope that we can once again create bonds of unity by way of faith," he said. "Faith shouldn't necessarily divide us, but in fact can bring us together."

Israeli police spokesman Micky Rosenfeld said hundreds of police were deployed in and around the Old City to maintain order and protect all visitors.

The calendars of five major Christian faiths coincide with one another this year, something that happens only once every four years.

Clergymen of different Christian denominations, some dressed in colorful robes, filed early Friday into the ancient Church of the Holy Sepulcher.

The various groups, which in the past have feuded over territorial claims in the church, put aside their rivalries and the ceremonies passed smoothly. At one point, Catholic and Greek Orthodox quietly held simultaneous prayers in different parts of the church.

In accordance with tradition, the church's doors were unlocked by a member of a Muslim family that has held the key for centuries.

Inside the church, pilgrims pressed their heads to the long, smooth stone where Jesus' body is believed to have been washed after being removed from the cross.

Among the Easter pilgrims on Friday, some could be heard singing hymns in English, Latin and Hindi.

Amid the crowd, Slavko Stojic, an electrical engineer from Serbia, walked with three large crosses on his shoulders which he wanted to have blessed before taking them home again.

The pilgrimage, Stojic said, transformed him.