Diego Maradona showed signs of marked improvement from an acute hepatitis condition blamed on alcohol abuse on the eighth day of his hospitalization on Thursday. 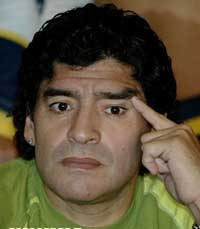 Hector Pezzella, director of the private Guemes Sanatorium where Maradona was being treated, said the 47-year-old Argentine soccer great was in better spirits, but wouldn't say when he expected him to be released.

"He is aware that his hospitalization is the best thing for him and he wants to be rehabilitated quickly," Pezzella added.

Maradona was being treated for health problems blamed on alcohol abuse, overeating and smoking.

The 1986 World Cup hero was near death during hospitalizations in 2000 and 2004 blamed on cocaine addiction. Doctors said he surmounted that addiction and dangerous drugs were not involved this time.