In a Holy Thursday Pope Benedict XVI bathed the feet of 12 laymen in a Rome basilica. This tradition symbolizes humility. He also will keep up an intense schedule of public ceremonies culminating on Easter Sunday. 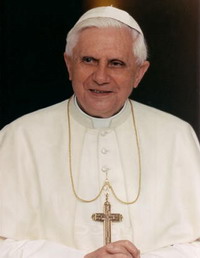 The feet-washing ritual by the pope, who wore gold-colored vestments, represents Jesus' humility toward his apostles during the Last Supper, on the day before he was crucified, and serves to remind today's faithful that they should be at the service of other people.

The Vatican said that the monetary offering from faithful presented to the pope at the Holy Thursday Mass in St. John Lateran Basilica would help support a medical dispensary in Baidoa, Somalia.

Benedict, who turns 80 on April 16, was making one of several Holy Week appearances.

On Thursday morning, he celebrated a Mass with cardinals, bishops and other clergy in St. Peter's Basilica. Good Friday appearances include a commemoration in the Vatican basilica of Jesus' suffering before his crucifixion, and in the evening, the pope will go to the Colosseum for the traditional Way of the Cross procession

The pope will lead two services to mark Easter, the Church's most important holy day. On Saturday night, he presides over a vigil service in St. Peter's Basilica, and on Sunday morning, he will celebrate Mass in what it is expected to be a packed St. Peter's Square.

On Sunday afternoon, the pope heads to his holiday residence in Castel Gandolfo for a week's break from Vatican City. Pilgrims and tourists can receive his blessing at the papal palace in the town in the Alban Hills outside Rome when he makes an appearance to the public on Monday.