What in fact do French women want? Equal pay, better child care and may be a female president. 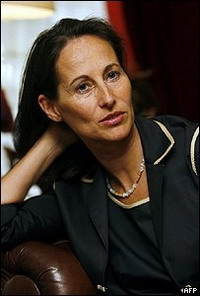 That was the underlying question as candidates reached out to women voters at a daylong forum Thursday, less than three weeks before presidential elections. Of the 12 candidates, four are women - including Socialist Segolene Royal, No. 2 in the polls behind conservative, tough-talking Interior Minister Nicolas Sarkozy.

Polls suggest France would have no problem electing its first woman chief of state, at least in theory. But there is a surprise: Surveys indicate women voters prefer Monsieur Sarkozy to Madame Royal. For men voters, it is the reverse.

Royal has charted a new political style, casting herself as a mother figure who can help France's youths - a major concern after 2005 riots by young minorities frustrated by high unemployment, racism and a lack of opportunities. Royal often says she does not have to copy men to succeed.

A mother of four, Royal often brings up her family in speeches, saying that she does politics by thinking about what she wants for her own children. Unlike some women leaders of decades past, such as Israel's Golda Meir and Britain's Margaret Thatcher, Royal has not made her mark by being tougher than men. Instead, she has played up her femininity, almost always wearing skirts and heels.

Yet a survey in late March by the TNS Sofres agency indicated that 35 percent of women voters backed Sarkozy, compared to 27 percent for Royal. Male voters preferred Royal to Sarkozy, with 27 percent of them backing her and 25 behind him.

The election is ultimately about politics, not gender. Royal, a former family and environment minister, is strong on the environment and education, but she has made gaffes on international affairs and has never held a top government post. Some of her early backers have fled to the camp of the No. 3 candidate, Francois Bayrou, who tries to transcend France's right-left divide.

The race's first round is April 22, followed by a final round May 6. In a runoff, Sarkozy would take 51 percent of the vote, and Royal 49 percent, according to an LH2 poll this week.

In a tight race, with many voters undecided, eight candidates vied Thursday to show that they are in tune with what women want.

Royal promised that the first law she would propose if elected would crack down on violence against women. She also said children would be required to go to school starting at age 3, rather than age 6.

Sarkozy said he wanted companies to take more responsibility for setting up in-office day-care centers, and said he would ask work inspectors to punish companies that offer lower pay for women, through sanctions - penal as well as financial.

Bayrou agreed with Sarkozy on the financial sanctions, and he promised that his government would have a fair balance of men and women Cabinet ministers.

Though the Socialists pushed through a 2000 law to encourage women politicians, only 14 percent of France's parliamentarians are women - putting France near the bottom of the list in the European Union, No. 22 out of 25.

All four women in France's presidential race come from the left. Besides Royal, there is Communist Marie-George Buffet, a former sports minister; six-time candidate Arlette Laguiller, a Trotskyist; and Dominique Voynet, a former environment minister and member of the Greens Party.