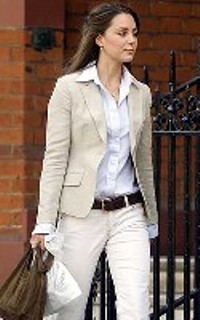 Kate Middleton’s harassment complaint against a newspaper is settled after an apology and admission of error, the Press Complaints Commission said Thursday.

Middleton filed a formal complaint with the Press Complaints Commission after the Daily Mirror on March 29 published a photograph of her carrying a cup of coffee.

Her stern expression was characterized in the accompanying story as her reaction to stories about William's encounters with other young women.

"It was taken by a freelance photographer in circumstances where we were later told she felt harassed," the newspaper's statement said.

"We got it wrong and we sincerely regret that."

The focus on Middleton, 25, has been compared to that on William's late mother, Diana, who was routinely followed by paparazzi.

On Middleton's birthday in January, a crush of photographers greeted her as she emerged from her London apartment to head for work. Speculation was rife at the time that she and William, second in line to the British throne, were about to announce their engagement.

The Press Complaints Commission, a voluntary industry group, reminded editors to "refrain from using photographs when the subject of the picture has asked the photographer to stop photographing them, and there is no obvious public interest reason for persisting."

"In this case, Kate Middleton has made repeatedly clear to the press - through the Commission, to photographers, and to editors directly - that she objects to being followed by photographers when she is on her own going about her daily business and there is no specific public interest reason for following her," the commission said.