An employee's 3-foot (0.9-meter) python went missing over the weekend in Google's Manhattan office. A search teams were sent on an all-out snake hunt. The searchers finally found the serpent, known as Kaiser, Monday night. 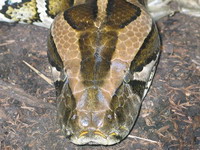 "A snake was lost; it was not an April Fool's joke. It was found last night," Google spokeswoman Ellen West said Tuesday. "The snake has left the building."

She did not say where in the office Kaiser was found. But a contributor to Google's official blog wrote that the staff was told the snake was found "relaxing behind a cabinet."

West confirmed the python belonged to a "Googler" and said the pet was now at its owner's home.

The Google blog contributor, software engineer Dan Bentley, wrote that while some employees laughed about the situation, others stood away from walls and corners, and the bathrooms were less crowded.

Company officials did not comment on a report that the search for the snake even included a missing snake flier. The Web site Vallewag, a technology gossip Web site, posted a photo of the flier, complete with a photo of the python.

The flier described the snake as "non-venomous" and "not dangerous," and responsive to the name "Kaiser," according to the Web site.