A Swedish couple is trying to convince officials that Metallica is a suitable name for a baby girl. 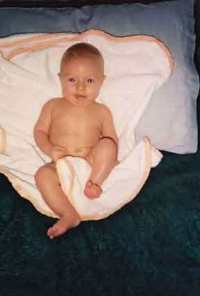 Michael and Karolina Tomaro are locked in a court battle with Swedish authorities, which rejected their application to name their six-month-old child after the legendary rock band.

"It suits her," Karolina Tomaro, 27, said Tuesday of the name. "She's decisive and she knows what she wants."

Although little Metallica has already been baptized, the Swedish National Tax Board refused to register the name, saying it was associated with both the rock group and the word "metal."

The couple was backed by the County Administrative Court in Goteborg, which ruled on March 13 that there was no reason to block the name. It also noted that there already is a woman in Sweden with Metallica as a middle name.

"We've had to cancel trips and can't get anywhere because we can't get her a passport without an approved name," Tomaro said.