Elizabeth Edwards, the wife of Democratic presidential candidate John Edwards, said a "hot spot" has been detected in her right hip in addition to the cancer found in one of her ribs, but said doctors told her they believe it is too small to pose a new health risk. 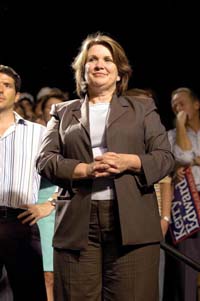 Edwards, who appeared with her husband on CBS' "60 Minutes" Sunday, was asked in the interview whether there were any new test results indicating her recurrent breast cancer had spread beyond the rib.

"There are a couple of hot spots, on the bone scan, in my right hip, for example," she replied. "And one of the questions is whether or not to do radiation to reduce the size of that - of the cancer in that location - and for fear that it might weaken my bone and that I might break my hip. But their consensus was that it was too small an area for that to be a risk."

The couple announced Thursday that she was once again facing cancer, only this time it was incurable and had spread to her bone. Despite the prognosis, John Edwards said he would forge ahead with his second bid for the presidency.

In the interview, Edwards and his wife defended his decision to remain in the race. She said she could not live with denying him the chance to be president.

"That would be my legacy, wouldn't it, Katie?" Elizabeth Edwards said, according to a transcript of the interview with Katie Couric, which was taped Saturday in Las Vegas. "That I'd taken out this fine man from - from the possibility of - of giving a great service. I mean, I don't want that to be my legacy."

Meanwhile, one of Edwards', Democratic rivals, Sen. Hillary Rodham Clinton, sidestepped a question at a town hall meeting Monday morning in Iowa about whether the Edwardses might be able to cope with both a family medical crisis and the demands of the White House if John Edwards were elected president.

"Our thoughts and prayers are with Elizabeth," Clinton said at the meeting aired on ABC's "Good Morning America," calling Mrs. Edwards "an incredibly strong woman."

She said she thought the Edwardses should decide "the best way for their family to handle this crisis. I'm not going to substitute my judgment for theirs ... It's so hard to have these intensely personal decisions played out in public."

Democratic Sen. John Kerry, Edwards' running mate on the 2004 Democratic ticket and himself a survivor of prostate cancer, praised the couple's decision to publicly reveal her cancer. "You have to have full disclosure," Kerry said Monday on NBC's "Today" show. As for Edwards' decision to stay in the race, Kerry said, "It's a very personal decision" that was not for others to second-guess.

"We're not privy to every bit of what the doctors have said," Kerry said.

For his part, John Edwards said no one should vote for him out of compassion for his wife's illness. "That would be an enormous mistake," Edwards said. "The vote for the presidency is far too important for any of those things to influence it."

Anticipating the demands of the campaign trail, Elizabeth Edwards said in the CBS interview that her options were clear, reports AP.

"Either you push forward with the things that you were doing yesterday or you start dying. That seems to be your only two choices," she said. "If I had given up everything that my life was about - first of all, I'd let cancer win before it needed to."