U.S. astronauts trial could start as early as July

A former astronaut arrested on charges of trying to kidnap a rival for the romantic affections of another astronaut could face trial in late July in Florida, the State Attorney's Office said Tuesday. 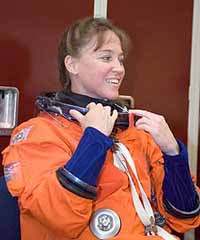 U.S. astronauts trial could start as early as July

Nowak, a mother of three who is separated from her husband, was arrested in February after allegedly confronting Colleen Shipman, the girlfriend of astronaut Bill Oefelein, in an Orlando airport parking lot. She drove from Houston, wearing an astronaut diaper so that she would not have to stop during her 900 mile (1,448-kilometer) trip, authorities said.

Nowak, 43, pleaded not guilty to attempted kidnapping, burglary with assault and battery. She was released on bail wearing a monitoring device on her ankle.

An arraignment was scheduled for Thursday, but Nowak is not expected to appear since her attorney already has filed the not guilty plea in writing.