Angelina Jolie's new son fly away from Vietnam to USA

Angelina Jolie and her newly adopted 3-year-old son left Vietnam in a private jet on Wednesday, en route to the boy's new home in the United States. 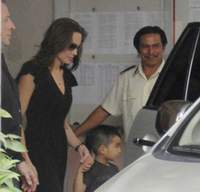 Angelina Jolie's new son fly away from Vietnam to USA

The superstar adopted Pax Thien Jolie in Ho Chi Minh City last week, but they later traveled to the capital, Hanoi, to pick up a visa allowing him to enter the United States.

Jolie left a pack of disappointed paparazzi in her wake, fleeing from them before boarding the awaiting Gulfstream jet at Noi Bai Airport.

During her week in Vietnam, Jolie spent her time cooped up in luxury hotels, shielding Pax from the photographers that trailed them everywhere, the AP says.

On the few occasions they came out to do adoption paperwork, they traveled in cars with darkened windows and only emerged after parking in basement garages that were sealed off from the media horde.

Jolie and her partner, Brad Pitt, made a surprise trip to Vietnam last November, when they visited the Tam Binh orphanage on the outskirts of Ho Chi Minh City. Pax had been living at the orphanage since he was abandoned as an infant.

Jolie filed adoption papers as a single parent because she and Pitt are not married.

They have three other children: 5-year-old Maddox, adopted from Cambodia, 2-year-old Zahara, adopted from Ethiopia, and another daughter, Shiloh, born to the couple last year.