U.S. talk show queen Oprah Winfrey opened her second school for poor South African youth Friday, this one an innovative, environment-friendly institution she hopes will be a model for public education in this country. 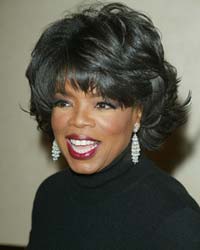 The Seven Fountains Primary School outside the remote town of Kokstad in the eastern KwaZulu-Natal province was funded by Oprah's Angel Network, a public charity that supports organizations and projects focused on, among other issues, education and literacy.

"The Seven Fountains School is an example of what schools in South Africa can become," said Winfrey at the formal dedication of the schools where lessons began earlier this year.

Dressed casually in a cream top and white pants, the billionaire celebrity danced and sang with teachers and children who lauded her with cries of "Long live Oprah, long live."

Winfrey first visited the school when it was located on a farm in the area during her Christmas Kindness 2002 initiative. Bearing gifts, clothing, books and teacher training materials, she was impressed by the school's 1,000 eager pupils and dedicated staff.

The school was later forced to move from the farm and relocated to a building with no windows, little electricity and running water and only four toilets.

During a follow-up visit by Winfrey's Angel Network in 2004, the organization committed itself to building a new school for the pupils.

"We thought the school you had before was not good enough so we wanted to build the best school for you," she said.

The school, which will be run by the KwaZulu-Natal Department of Education, has 25 classrooms, three multipurpose rooms, a library, computer center and two sports field.

It was built with 12 million rands (US$1.6 million; EUR1.2 million) in funds. The costs were in line with the department's budget for a school this size.

The supply of water to the area is irregular so the school as an innovative water recycling system that harvests rain water and also uses seesaws and merry-go-rounds to pump water. It uses solar power and has landscaped gardens that supply vegetables for school meals.

"It can be done within the expectations of budgets. We used our imagination and creativity to build not only a good school but a great school," Winfrey said.

Winfrey emphasized the importance of education in combatting poverty and said every child had a right to succeed in life. "We are here today to celebrate the transformative power of education," she said.

The school's principal Veliswa Mnukwa praised Winfrey for hearing their plight and called her an "angel." "This is the second time you are visiting us but now it is a very different school. Gold, platinum, silver, diamonds ... nothing compares with what you have done for us," she said.

Nduli Amahle, 11, cannot believe how much better her new school is compared to the one on the farm where she started her education. Now she has computers, a library, sports fields and a landscape playground.

"I want to thank Oprah for giving us this school. It is going to change my life and help me become a doctor," she said.

Parent Lindiwe Mbambo said the school is also going to have a lasting affect on the community.

"Even as a parent I am going to participate here. There is a night school, a computer center and a library that we can use. I can't express my gratitude for Oprah. The old school was so miserable," she said.

Winfrey opened her Leadership Academy for Girls outside Johannesburg to great fanfare on Jan. 2 with celebrities like Tina Turner and Spike Lee in attendance as well as former President Nelson Mandela.

The lavish US$40 million (EUR30.24 million) school was the fulfillment of a promise she made to Mandela six years ago and aims to give 152 girls from deprived background a quality education in a country where schools are struggling to overcome the legacy of apartheid.

"This school is a symbol of leadership for Africa," Winfrey said at the time.

But some parents have complained to local media about academy's rules limiting girls to one visit a month and restricting their cell phone calls and consumption of junk food.

"It was a nightmare," foster parent Frances Mans said, according to the News24 Web site. "We had only two hours to see my child. Surely this isn't a prison or an institution?"

There have been other complaints about a lack of respect for African culture and tradition after one of the girls was allegedly refused permission to attend the funeral of a member of her extended family.

John Samuel, chief operating officer for the academy, said unhappy parents who had raised their concerns with Winfrey on the phone had been reassured.

"They say they are satisfied that the girls are not being treated unfairly," he said.

He said Winfrey had spent time at the academy meeting with staff and pupils ahead of Friday's event.

Samuel said the academy tried to discourage parents from bringing the girls soft drinks or sweets as they were well-looked after and received a nutritious diet.

Samuel also dismissed complaints that the academy was culturally insensitive and said it was based on the African philosophy of ubuntu, which places an emphasis on the collective.

"We are very conscious of how we deal with people and have the community's interest at heart," he said.

Built on 21 hectares (52 acres), the 28-building campus resembles a luxury hotel, with state-of-the-art classrooms, computer and science labs and a library, theater and wellness center. Each girl lives in a two-bedroom suite. It will eventually have 450 students, reports AP.

But the school has been called elitist. ActionAid, a global development group, said Winfrey's money could have been better spent improving the quality of education for more children.