Angelina Jolie happy to have Vietnamese boy in her family

Superstar mom Angelina Jolie isn't shooting any films right now and is happy for the chance to focus on her growing family - including its newest member, Pax Thien Jolie - according to an interview published in a Vietnamese newspaper Friday. 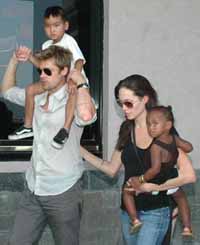 Angelina Jolie happy to have Vietnamese boy in her family

"I will stay at home to help Pax adjust to his new life," Jolie said in an exclusive interview with the Ho Chi Minh City Law newspaper. "I have four children and caring for them is the most important thing for me at the moment. I'm very proud and happy to be their mother."

Jolie adopted the 3-year-old Vietnamese boy Thursday in a ceremony at the Ho Chi Minh City justice department, which publishes the newspaper.

Since she arrived in Vietnam on Wednesday night, Jolie has been hounded by a jostling horde of photographers and reporters, who followed her from the orphanage to the justice department for Thursday's ceremony.

Jolie said she was sorry that her new son had to be exposed to the frenzy, and expressed concern about how it would affect him.

"Photographs and press coverage will make him upset," Jolie said in the interview, which was published in Vietnamese. "I'm very worried about that. I would like to say I'm sorry for bringing this into Pax's life."

Jolie said she plans to visit the capital, Hanoi, and would like to take her children to the beach during her stay in Vietnam, which is expected to last until sometime next week.

Her oldest son, 5-year-old Maddox, came to Vietnam with Jolie. Her other children are 2-year-old Zahara, adopted from Ethiopia, and another daughter, Shiloh, born to Jolie and her superstar partner Brad Pitt in May.

In the interview, Jolie said she has wanted to adopt children since she was young.

"Everyone would agree that children need to have a family," the paper quoted her as saying. "I have the ability to help children fulfill that desire. Why should I say no?"

In the article, Jolie said she felt very comfortable in Vietnam and intended to return to the country often, reports AP.

"To the best of my ability, I would like to learn about your country and will see what I can do to help," she was quoted as saying.