One woman committed suicide by setting herself ablaze after her father-in-law tried to rape her. Another set herself on fire because her brothers would not let her marry, preferring that she remain their servant at home. Yet another told her mother before she died that her husband beat her daily. 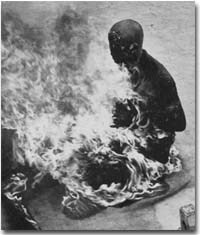 Testimony gathered by the Afghan Independent Human Rights Commission documents how life for many Afghan women remains so bleak that some choose a horrific and painful death instead.

The group interviewed about 800 Afghans whose sisters, daughters and daughters-in-law have killed themselves by self-immolation to escape domestic abuse, forced marriage and other misogynistic social customs.

The report and anecdotal evidence from other rights workers suggests the phenomenon is growing, with desperate women sometimes mimicking what they have seen reported on TV.

"It's really a big problem in Afghanistan," said Nabila Wafiq, who has researched the issue for the aid group Medica Mondiale, which has interviewed women who survived their self-immolation attempts.

Reports from Herat, in western Afghanistan, show about 90 women set fire to themselves last year there and more than 70 percent died. Afghanistan's poor health system can do little for the badly burned.

The commission report, released last week, covers Badghis, Herat, Farah, Nimroz and Kandahar, provinces that media and other reports suggest are the worst affected. However, women's rights advocates suspect that self-immolation is a nationwide problem.

The study indicates a marked increase in reported cases in two of the provinces. Two years ago in Farah province, there were 15 cases of self-immolation reported. That figure had jumped to 36 in the first six months of last year, the commission found. Kandahar province had 74 cases two years ago, and 77 cases in the first six months of this past year.

The statistics were recorded according to Afghanistan's calendar year, 1385, which ends March 20.

Of the other three provinces, Herat and Badghis showed a slight upward trend, and Nimroz a slight decline.

"These figures are shocking and indicative of the much wider problem of violence against women, the effects of which are far-reaching," said Caroline Hames, gender and politics specialist at the U.N. Development Fund for Women (UNIFEM). "Self-immolation is just one of the consequences of such violence, which is a daily reality for so many women in Afghanistan."

Despite advances in women's rights since the fall in 2001 of the Taliban regime that barred education and employment for females, UNIFEM estimates that at least one out of three Afghan women has been beaten, coerced into sex or otherwise abused. The abuser is usually a family member or someone she knows. Rarely is anyone prosecuted or even reprimanded.

Hussein Hasrat, a researcher who worked on the commission's report, said the data suggested a jump in the number of women committing suicide by fire. However, he acknowledged it was possible that the recorded increase was a result of better data.

Reliable nationwide statistics are not available. Many families cover up what happened because of shame, while a lack of medical care and government services mean many such cases are never officially recorded.

Wafiq said that Medica Mondiale has definitely seen more self-immolation cases. Often, she said, women mimic what they learn from news reports, which fail to point out that those who survive are left scarred and deformed.

Fourteen pages of the commission's report are dedicated to brief descriptions by family members of the reasons why these women committed suicide. Most are because of rape, beatings and accusations questioning their honor. None of the dead women or their relatives were named in the report, the AP says.

The mother of a victim in Badghis is quoted as saying that her daughter committed self-immolation because her fiance accused her of getting pregnant by another man, who did not accept the child.

The mother of another victim said that her daughter was actually a victim of domestic violence although it was portrayed by others as a suicide.

"They beat my daughter a lot, then they poured fuel on her and said that she committed self-immolation," the mother says. She did not give details of the attackers.