After a US$3,500-a-head gala the day before, Michael Jackson attended another party in Tokyo for his less affluent fans, more than 1,000 of whom crowded a popular nightclub Friday for an evening with the reclusive pop star. 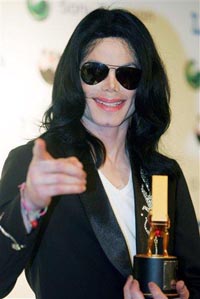 Tickets from Friday's party went for 15,000 yen ($130), a tiny fraction of the 400,000 yen that several hundred fans and business people paid for a chance to meet and greet Jackson the night before at a dinner held in his honor.

Jackson offered only brief remarks at the end of that six-hour party and did not perform on stage.

At Friday's party, guests most in the 20s or 30s were treated to a stage show but were not given the one-on-one opportunity that "premium" ticket partygoers got the night before. Jackson watched the show from a second-floor VIP room.

Japan remains one of Jackson's strongest fan bases, and Jackson fans have been out in force since his arrival in Tokyo on Sunday.

A screaming mob greeted him at the airport and more crowded outside a popular electronics shop that gave him the run of the store after-hours the following day. Before leaving Japan, Jackson was also scheduled to tour a U.S. Army base just south of Tokyo on Saturday.

Jackson, one of the best-selling artists of all time, has lived abroad since his 2005 acquittal on child molestation charges, forsaking his Neverland Ranch in California for Bahrain, France and a castle in Ireland. He now lives in Las Vegas.

This is Jackson's second trip to Tokyo in less than a year.

"Japan is one of my favorite places to visit in the world," Jackson told the crowd Thursday, reading from a statement. "I want to thank all of you for making me the biggest-selling artist in Japan."

In comments to The Associated Press, Jackson said he is happy with his career, which he is trying to revive after his 2005 acquittal and a series of other legal battles over his personal finances.

"I've been in the entertainment industry since I was 6 years old," he told AP. "As Charles Dickens says, `It's been the best of times, the worst of times.' But I would not change my career."

Jackson, 48, said he was not bitter over his succession of difficulties, reports AP.

"While some have made deliberate attempts to hurt me, I take it in stride because I have a loving family, a strong faith and wonderful friends and fans who have, and continue, to support me," he said.