Irate Mumbai residents had a blunt message for celebrity newlyweds Actress Elizabeth Hurley and Arun Nayar get off our beach. 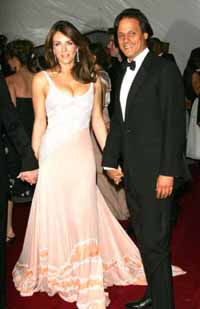 And Mumbai city hall agreed, unceremoniously demolishing a wooden deck that had been built on a popular beach for a party to honor the couple on the second day of their six-day Indian wedding extravaganza.

"Juhu beach belongs to the public and illegal constructions and extensions onto the beach are not permitted," he said.

The hosts, Indian industrialist Adi Godrej and his wife Parmeshwar Godrej, could not be reached for comment but residents said the private dinner party went on as scheduled.

A smaller platform on the beach was permitted instead, said T. Sonpar, co-ordinator of the Juhu Citizens Welfare Group.

"The rich and famous usually get away with this. But this time at least action was taken and the extension on the beach was reduced," said Sonpar, who lodged complaints with police and civic officials. "Let your guests sit on the sand, we have no problem. But don't restrict our access."

Indian media reported that more than 100 guests including friends and relatives traveling with Hurley and Nayar from Britain attended the party. Indian newspapers carried photographs of Hurley shielding her young son from flashbulbs of photographers and cameramen gathered outside the Godrej home.

The couple left early Wednesday for wedding celebrations at Umaid Bhavan Palace, the Maharaja of Jodphur's palace-turned-luxury resort in the state of Rajasthan in western India, where their penchant for secrecy and security was reported to be causing headaches for the locals including the Maharaja.

A total ban on mobile phones inside the palace, apparently prompted by the couple's desire for media privacy, was also being applied to the Maharaja himself, even though he lives there, the Hindustan Times newspaper quoted a member of the royal staff as saying.

"We have been told there can be no exceptions even though the palace is the maharaja's home," the staffer said, reports AP.

Hurley, 41, and Nayar, 42, were married Friday in a private civil ceremony at Sudeley Castle in Winchcombe, 125 miles west of London. They held a blessing and party at the castle Saturday evening, with guests including Elton John, Kate Moss, Elle Macpherson and Hurley's ex-boyfriend Hugh Grant.

They have reportedly signed a lucrative deal with Hello! magazine for exclusive rights to images of the event.