Police are seeking ten men, including several tribal elders, accused of pressuring a Pakistani woman to hand over her teenage daughter as payment for a 16-year-old poker debt, officials said Tuesday. 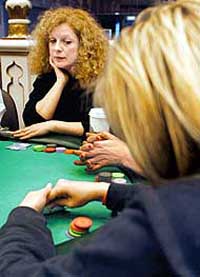 In the latest case highlighting how conservative customs threaten women's rights in Pakistan, Nooran Umrani alleges that, despite paying off her late husband's debt of 10,000 Pakistani rupees (US$165, EUR125), she was threatened with harm if she failed to hand over her daughter, Rasheeda.

The 17-year-old was to be surrendered as a bride for the son of Lal Haider, the man who won the card game years before, Umrani told reporters on Monday in Hyderabad, 160 kilometers (100 miles) northeast of Karachi.

Police said Tuesday that the mother and daughter were in their protection and that an investigation was opened against Haider, his son and eight others.

"We are investigating the matter and vigorously searching" for the men, Hyderabad police chief Irfan Bhutto said.

Nooran said her husband was a gambler who ran up the debt at a poker game when Rasheeda was 1 year old. He promised Haider that he would get Rasheeda in lieu of payment when she grew up, Nooran said.

He said a group of elders from the tribe had come to Hyderabad in January to investigate the case and had ruled that, under tribal custom, the girl should be married to Haider's 23-year-old son Abdul Ghani.

Police want to arrest the elders, he said, reports AP.

President Gen. Pervez Musharraf has vowed to give women more rights in line with his policy to project Pakistan as a moderate, progressive Islamic nation.

In December, Musharraf signed into law a bill that makes it easier to prosecute rape cases in the courts, and the country's ruling party recently introduced a bill to outlaw forced marriages, including under tribal custom in which women are married off in order to settle disputes.