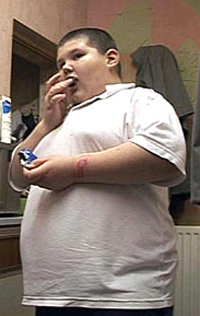 Social service officials will meet family members Tuesday to discuss the health of Connor McCreaddie, who weighs more than three times the average for his age.

"The worst case would be Connor getting taken into care. He is well cared for," the boy's mother, Nicola McKeown, told ITV television.

A spokeswoman for health officials in Wallsend, North Tyneside, 300 miles (480 kilometers) north of London, said Tuesday's hearing was part of a process that could eventually lead to Connor being taken into protective care. She declined to comment further.

The health agencies organizing Tuesday's meeting issued a statement saying they "have been working with the family over a prolonged period of time and will continue to do so."

An unnamed health official was quoted as telling The Sunday Times that taking custody of Connor would be a last resort, but said the family had repeatedly failed to attend appointments with nurses, nutritionists and social workers.

"Child abuse is not just about hitting your children or sexually abusing them, it is also about neglect," the official was quoted as saying.

Dr. Colin Waine, the director of the National Obesity Forum in Nottingham, England, called Connor's lifestyle "extremely dangerous," adding he is at risk of developing diabetes in his early teens, and cardiovascular and nervous system problems in his twenties.

"I'm not saying they can't care for him, but what they are doing is through the way they are treating him and feeding him, they are slowly killing him," he said.

Connor's case attracted national attention after his mother allowed an ITV News crew to film his day-to-day life over the course of a month.

When the boy was 2Ѕ, he was too heavy for his mother to pick up and at 5, he weighed more than 126 pounds (57 kilograms), The Journal, a northern regional paper reported.

Now Connor, who is tall for his age at 5 feet (1.52 meters) tall, wears adult clothes and size eight shoes, The Journal said.

His mother said he steals and hides food, frustrating her efforts to help him.

"He has double, treble what a normal boy (of his age) would have, but if I didn't give him enough at teatime then he would just go on at us all night for snacks and stuff," she told ITV.

Connor, who lives with his mother and sister, has difficulty dressing and washing himself, misses school regularly because of poor health and is targeted by bullies, reports AP.

"People pick on us because of my weight. They call us fat. It makes us feel sick of the nutters always shouting at us," Connor told ITV.