As the custody battle over Anna Nicole Smith's body devolved into an all-out legal circus, the judge overseeing it emerged as its affable ringmaster. 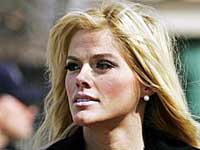 Circuit Judge Larry Seidlin said the hearing continuing Friday over the final resting place of the former Playboy Playmate's body could be lengthy.

On Thursday, he ordered that additional DNA be taken from Smith's body, saying he wanted to make sure her body would not have to be exhumed.

"When we bury her, I want it to be forever," Seidlin said.

As lawyers for the three parties fighting for control of Smith's body took swipes at each others' clients Thursday, Seidlin, 56, entertained the packed room, calling lawyers "terrific" and "beautiful." He frequently spoke off the cuff and seemed to enjoy the proceedings.

"It was delightful having everyone," he said at the end of the day.

There were angry attacks at times, resounding laughter at others and a standing-room only audience. Courthouse staff struggled to push their way through, and there were not enough chairs for all the attorneys.

Seidlin warned attorneys he would schedule as many sessions as it takes to resolve the issue.

Smith's longtime companion, Howard K. Stern, claims he is executor of her will and wants her buried next to her son in the Bahamas. Her estranged mother, Vergie Arthur, wants her buried in Smith's home state of Texas.

On Wednesday, Seidlin declared Smith's corpse would stay refrigerated in the medical examiner's office until he said otherwise.

Smith, 39, died Feb. 8 after collapsing at a Florida hotel.

As the proceedings dragged on, police investigated a burglary report in the Bahamas at a mansion that Stern and Smith shared. Stern, who was at the mansion with the officers, claims a computer, home videos and other items were taken from the house after Smith's death.

In California, Prince Frederic von Anhalt, the husband of actress Zsa Zsa Gabor, filed legal documents Thursday seeking a DNA test to determine if he fathered the baby. Von Anhalt, who says he is 59, has said he and Smith had a decade-long affair.

Also in California on Thursday, the state medical board said it was investigating a doctor who may have prescribed methadone to Smith through a prescription that contained an alias.

The Medical Board of California began looking at Dr. Sandeep Kapoor after receiving information about possible misconduct, board spokeswoman Candis Cohen said. Cohen declined to give details on the allegation or its source, but said it was connected to Smith, reports AP.

Among other things, the board is investigating whether it is legal to prescribe drugs for someone using an alias, Cohen said. She described the review as routine, and said the board was obligated to review all allegations of physician misconduct.

The celebrity news Web site TMZ.com this week published what appeared to be a 2006 pharmacy receipt for a methadone prescription written by a "Dr. Kapoor, S." to a "Chase, Michelle." TMZ said Smith used the name as an alias.

A woman who answered the telephone at a listing for Kapoor in Los Angeles hung up when The Associated Press called Thursday.

Smith was the widow of Texas oil tycoon J. Howard Marshall II, whom she married in 1994 when he was 89 and she was 26. She had been fighting his family over his fortune since his death in 1995.