Scarlett Johansson is Harvard's Hasty Pudding Woman of the Year

Scarlett Johansson earned her pudding pot at Harvard when she pretended to take a spoof version of the SAT exam before being crowned Hasty Pudding Woman of the Year. 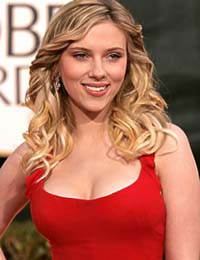 Scarlett Johansson is Harvard's Hasty Pudding Woman of the Year

The award is given to performers who have made a "lasting and impressive contribution to the world of entertainment" by Hasty Pudding Theatricals, the nation's oldest university drama troupe.

"Thank you so much for this fabulous golden pot. It's been such a wonderful day. This is the closest I'll get to a Harvard degree for sure," Johansson said upon receiving her award Thursday. "It's a real honor and I can't wait till later tonight when we party."

Before the roast, Johansson led a parade through Harvard Square, sitting in the back of a silver Bentley convertible, flanked by Harvard students in drag.

Johansson declined to answer when she was asked to make an analogy between director Woody Allen, in whose films she has appeared, and fashion designer Issac Mizrahi, who groped her breast on the red carpet carpet at the Golden Globes last year, reports AP.

The 22-year-old actress has appeared in films including "Lost in Translation," "The Girl with a Pearl Earring," "Match Point," and "The Black Dahlia."

Ben Stiller is to be crowned Harvard's Hasty Pudding Man of the Year on Feb. 23.