Drew Gilpin Faust recalls her mother lecturing her that "this is a man's world, sweetie, and the sooner you learn that, the better off you'll be." 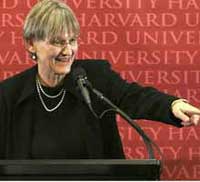 It was a lesson, she wrote in a memoir, that she refused to accept.

"I hope that my own appointment can be one symbol of an opening of opportunities that would have been inconceivable even a generation ago," Faust told a news conference Sunday. But she also added, "I'm not the woman president of Harvard, I'm the president of Harvard."

A U.S. Civil War scholar and respected university insider, Faust, 59, emerged as a candidate considered by the school's governing body to be best suited to cool tensions within the faculty after the tumultuous five-year presidency of Lawrence Summers.

Two years ago, Summers created an uproar when he said that genetic gender differences may explain why few women rise to top science jobs. At the height of the controversy, Faust oversaw two panels that examined gender diversity on campus.

She has been dean of the Radcliffe Institute for Advanced Study since 2001, two years after the former women's college merged into Harvard as a research center with a mission to study gender issues.

Faust was elected by the seven-member Harvard Corporation, the school's governing body, and ratified by the 30-member Board of Overseers.

With Faust's appointment, half of the eight Ivy League schools have woman presidents. The other three are Amy Gutmann of the University of Pennsylvania, Shirley M. Tilghman of Princeton University, and Ruth J. Simmons of Brown University.

The Harvard presidency is perhaps the most prestigious job in higher education, offering an academic pulpit and unparalleled resources a university endowment valued at nearly $30 billion (EUR23 billion).

Faust pivots from managing Radcliffe, a think-tank with 87 employees and a $17 million (EUR13 million) budget, to presiding over Harvard's 11 schools and colleges, 24,000 employees and a budget of $3 billion (EUR2.3 billion).

"She will need to scale up and she's shown all the qualities that suggest she'll do that superbly," Gutmann said.

Lydia Barlow, a 26-year-old graduate student of Middle Eastern studies, said Faust is "going to have to be outstanding" because "people see it as a knee-jerk reaction to the comments made by President Summers."

"All the reports have been 'gender, gender, gender,' and I'm thinking to myself 'isn't that funny? That has not been something we've talked about at all,"' he said.

In Faust, Harvard not only has its first woman leader, but a president who has candidly discussed her feminist ideals in a memoir, "Shapers of Southern History: Autobiographical Reflections." In it, she recalled her mother's advice about a "man's world."

Born Catherine Gilpin to a privileged family in Virginia's Shenandoah Valley, Faust recalls a conversation with the family's black handyman and driver that inspired her to send a letter written in block letters on school notebook paper to President Dwight D. Eisenhower pleading for desegregation.

Faust joins an exclusive roster of Harvard presidents that has included colonial clergymen, Massachusetts patricians and a cabinet secretary.

Interim President Derek Bok will serve until July 1 when Faust takes over.

Faust becomes the first president without a Harvard degree since Charles Chauncy, an alumnus of Cambridge University, who died in office in 1672. She attended Bryn Mawr College and the University of Pennsylvania, where she was also a professor of Southern history, reports AP.

Summers often stumbled in maintaining a diplomatic balance with the school's disparate factions. Displeasure with what many professors called a brusque management style ultimately led to a no confidence vote from faculty last February.

"I believe Faust will bring dignity and honor back to Harvard," said Harry R. Lewis, a former Harvard dean who wrote a book that criticized the school for coddling students.