From the dawn of the space program, America's astronauts have been treated like stars, saluted as national heroes, and indoctrinated in NASA's can-do, failure-is-not-an-option ethos. 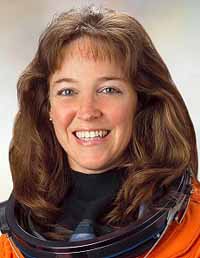 Could that explain the downfall of Lisa Nowak, the astronaut accused of attempted murder? Were the expectations too high? The pressures too great?

No one may ever know exactly why Nowak drove 900 miles (1,450 kilometers) to confront a woman who was reportedly her rival for the affections of a space shuttle pilot, but experts say the same traits that make astronauts such high achievers can combine to aggravate emotional problems and strain relationships.

"I really believe that NASA goes overboard in promoting how heroic and super all these people are," said Dr. Patricia Santy, a former NASA psychiatrist and author of the book "Choosing The Right Stuff."

"They themselves have forgotten these are ordinary people and in that kind of celebrity culture, there's a sense of entitlement."

Santy said the astronaut corps is "like a family, but it's almost like a dysfunctional family when it comes to understanding that these interpersonal issues have profound impacts."

Former astronaut Jerry Linenger said astronauts take pride in their self-discipline, "and you set a goal and it's just going, going, going and you let nothing get in your way."

That single-minded pursuit reminds Linenger of Nowak's drive from Houston to Orlando, Florida, to confront an Air Force captain from Florida who she allegedly believed was involved with the same space shuttle pilot she loved.

In a statement, officials at Patrick Air Force Base in Florida said the captain, Colleen Shipman, remained on duty and was "holding up well considering the circumstances."

However, Linenger said, that's when Nowak's training should have kicked in and led her to reflect on her actions: "To not make a midcourse correction is scary. It's just off her training and everything else."

Nowak, like many of her colleagues, pursued a career in spaceflight since childhood. Then, after her shuttle trip last summer, her goal had been achieved, and the prospects for another mission were dim, even though she remained in the prime of her life at age 43.

Space shuttles are scheduled to be retired in 2010, and many astronauts have been told that second and third spaceflights will be tough to get. A replacement spacecraft will not ready until several years later.

Other astronauts have struggled with similar doubts about their future.

"The biggest problem that every astronaut has had once they've obtained their goal is 'What do I do next, what do I focus on?'," said Jay Barbree, a longtime NBC correspondent who has covered every launch and is the author of the upcoming book "Live From Cape Canaveral."

"It was more commonplace than most people knew because overachievers had no major goals in front of them." Among earlier astronauts, "most every one ofthemcame back had adjustment issues," Barbree said.

NASA flight crew operations chief Ellen Ochoa said the agency is considering whether to do more to look after astronauts once they return from space. "Individuals may wonder where they fit in," she said. "It's a puzzle."

Buzz Aldrin, the second man to step on the moon, became depressed and had problems with alcohol after returning to Earth.

Aldrin said the space agency "can deal with the physics and engineering and the science of things. They behave according to predictability. But you can't predict the human reaction and response and how complex it is. It is not easy for NASA."

Nowak "had to be somehow asking the question 'What do I do next?,"' Aldrin said Thursday. He said there is no good system to support astronauts after their spaceflight days are over: "Nobody is helping them readjust. It's hard for NASA to take on that responsibility."

University of California psychiatrist Nick Kanas, who has conducted four studies of astronauts' mental health, said space travelers at times have adjustment issues, but not quite the dramatic changes that people report anecdotally.

"We didn't find big personality changes as a group," Kanas said. "They have to adjust and that is certainly something that happens. For it to reach mental illness proportion is really kind of rare."

He compared astronauts' problems to those of a retiring baseball player.

The Russians even have a name, asthenization, for space mental health problems. The term is usually reserved for people have flown at least six weeks, as opposed to Nowak's shorter flight, and plays out with fatigue, irritability, lack of appetite and sleep problems, Kanas said.

In response to Nowak's arrest, NASA on Wednesday launched two separate reviews of how astronauts are psychologically evaluated.

In the military, pilots going through extraordinary stress, such as a divorce, are ordered to seek help, but not at NASA, Santy said.

"They wouldn't think of flying a malfunctioning screw or a screw that had a flaw on it. They'd ground the shuttle," Santy told The Associated Press. "They don't imagine that problems in the human element have just as catastrophic consequences."

American University professor Howard McCurdy, who has written several books about space policy and history, said the stress of working in the space program puts pressure on personal relationships and results in higher divorce rates among astronauts, reports AP.

Astronauts, like police officers, treat their profession as a way of life, not just a job, he said.

"The astronaut culture is still a carry over from 'The Right Stuff' days," McCurdy said. "It is very high intensity; it is very competitive."