Hong Kong-born Princess Alexandra of Denmark, divorced from a Danish prince, will give up her royal title to marry her boyfriend next month, the royal palace said Wednesday. 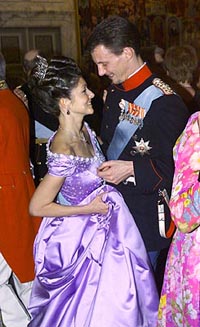 Alexandra married Prince Joachim, the younger brother of Crown Prince Frederik, in November 1995. The couple separated in 2004 and divorced the following year the first divorce in the Danish royal family since 1846.

Marrying Joergensen, Alexandra can no longer call herself princess and ceases to be a member of the royal family. However, she will retain the title of Alexandra Christina, Countess of Frederiksborg, Ullerup said.

After the wedding the bride and groom will live in Alexandra's villa in Oesterbro, a suburb of Copenhagen, with her two sons, Prince Nikolai and Prince Felix, reports AP.

Alexandra will continue to receive her royal allowance of about 1.9 million Danish kroner (US$330,000 or EUR250,000) a year, but will be subject to tax and other duties like other Danish citizens, Ullerup said.

The Danish monarchy is one of the world's oldest, and the royal family traces its lineage back to the Viking king Gorm the Old, who died in 959.