Archaeologists have uncovered what may have been a village for workers or festival-goers near the mysterious stone circle Stonehenge in England. 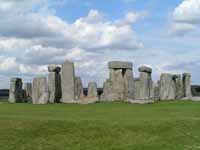 The village was located at Durrington Walls, about two miles (3.2 kilometers) from Stonehenge, and is also the location of a wooden version of the stone circle.

Eight houses have been excavated and the researchers believe there were at least 25 of them, archaeologist Mike Parker Pearson said Tuesday at a briefing held by the National Geographic Society.

The small wooden houses had a central hearth, he said, and are almost identical to stone houses built at about the same time in the Orkney Islands.

The researchers speculated that Durrington Walls was a place for the living and Stonehenge where several cremated remains have been found was a cemetery and memorial. Both are connected to the Avon River by paths they called avenues.

Parker Pearson said remains of stone tools, animal bones, arrowheads and other artifacts were uncovered in the village, reports AP.

Remains of pigs indicated they were about nine months old when killed, which would mark a midwinter festival, he said.