Lauren Nelson, an aspiring Broadway star, was crowned Miss America, the second year in a row that a Miss Oklahoma has won the crown. 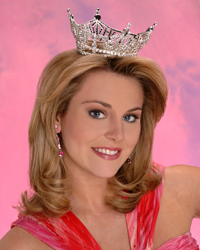 Nelson, 20, of Lawton, Oklahoma, is a student at the University of Central Oklahoma and wants to get her master's degree in musical theater.

Nelson was crowned by last year's winner, Jennifer Berry. Nelson, a blonde who told judges she wishes she was taller, sang "You'll Be In My Heart" in the talent competition and plans to promote protecting children online during her yearlong reign as Miss America.

The last state to win back-to-back titles was Mississippi, when Mary Ann Mobley crowned Lynda Mead as Miss America in 1960.

Nelson began singing in a church choir as a girl. Over the years, she acted in musicals such as "Bye Bye Birdie" and "Anything Goes."

The pageant tossed in a few reality-TV twists on the way toward selecting its ideal American woman in a new time slot on the Las Vegas Strip.

Mario Lopez, of the TV dance competition "Dancing with the Stars" and the high school comedy series "Saved by the Bell," hosted the show, its second year at the Aladdin Resort & Casino on the Las Vegas Strip. The pageant moved from Atlantic City, New Jersey, last year in an attempt to breathe new life into an institution that had fallen far from the forefront of American pop culture.

In one of the new features, viewers were shown a glimpse of interviews between contestants and judges, something that previously was closed. In her clip, Nelson spoke about how her faith helped her make it through the stress of pageantry.

But Nelson wasn't the viewers' favorite, according to a text message voting system instituted this year taking a cue for the hit TV singing competition "American Idol."

Phillips, a singer and choir director's daughter, was the fan favorite in the talent competition. Miss California, Jacquelynne Fontaine, was the viewers' swimsuit competition pick for her turn in a blue bikini, and Mississippi's Foshee was voted the favorite in the evening gown contest. The viewer vote did not count toward the winners.

The changes to the show are part of a larger marketing blitz aimed at reintroducing a new generation to Miss America, a feminine idol born of a publicity stunt on the New Jersey seaside in 1921.

After a long reign as a cultural icon, Miss America's ratings have plummeted, and sexier reality shows have eclipsed her girl-next-door appeal. The addition of pop quizzes and casual-wear contests could not save the pageant from losing its network TV contract in 2004.

MTV-Networks' CMT cable television station picked it up in 2005 and has been attempting to restore the pageant to its former glory. It stripped the pageant of the failed gimmicks.

Last year's crowning of Berry attracted less than a third of the viewers it had the year before, but was replayed 20 times on CMT and its sister-network VH1 for a total of 36 million viewers, reports AP.

With a year to market its new product, CMT came back with its own set of gimmicks a $1 million (EUR 770,000) giveaway for picking the winner and a reality-TV special intended to help viewers connect with the contestants in the days before the crowning.

CMT, which reaches 83 million households, hoped the Monday-night airing would attract a broader, younger audience the sort of viewers whose devotion first catapulted the beauty queen to prominence.