A minister who disclosed that he was gay before Atlanta's oldest Lutheran church hired him as its pastor could now be defrocked for announcing he has a partner. 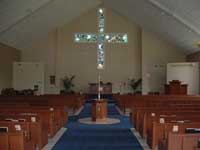 The Rev. Bradley Schmeling was chosen in 2000 to lead St. John's, though some worried his sexuality could threaten its standing with the Evangelical Lutheran Church in America. But last year, the 350-member congregation threw a party for him and his partner, when Schmeling announced he had found a lifelong companion.

Bishop Ronald Warren of the ELCA's Southeastern Synod, however, asked the 44-year-old pastor to resign. When Schmeling refused, Warren started disciplinary proceedings against him for violating church rules barring sex outside of marriage.

On Friday, Schmeling will face a hearing structured much like a trial where a committee of 12 ELCA members will decide whether he can remain an ordained minister in the church that sits among mansion-lined hills just east of downtown.

If the committee rules against Schmeling, he could face suspension or no longer be recognized as an ordained minister in the ELCA. In the latter case, if his congregation opts to keep him as its pastor, the ELCA could also discipline St. John's.

The ELCA maintains it is simply following its own rules, which bar unmarried clergy whether gay or straight from having sex. The denomination believes that sex is reserved for marriage and marriage for heterosexual couples. Still, many Lutheran churches support ordaining partnered gays and perform same-sex blessing ceremonies despite the policy.

Schmeling and his supporters say they hope his case will make the church more accepting of pastors in same-sex relationships.

"We've always been a church that emphasizes the unconditional love of God, so this policy runs counter to that," Schmeling said in an interview with The Associated Press last weekend.

Other mainline Protestant denominations, including the Presbyterian Church (U.S.A.), the Methodists and the Episcopalians, also have been struggling for years to resolve differences over the Bible and gay clergy.

The Rev. Irene "Beth" Stroud was defrocked by the United Methodist Church in 2005 for being in a lesbian partnership, while a Presbyterian assembly last year voted to create leeway for congregations to hire gay clergy, reports AP.

Schmeling told both his bishop and congregation about his sexual orientation before he was chosen pastor. He didn't have a partner at the time.

ELCA spokesman John Brooks said that if a heterosexual pastor was in a relationship outside of marriage and he refused to repent, he would face similar disciplinary proceedings. When Warren announced in August that he was taking action against Schmeling, he said he wouldn't comment until a verdict was rendered.