The Golden Globes lived up to its reputation as the most relaxed of the major awards shows as Hollywood's leading ladies from both the movie and TV worlds chose flowing gowns, tousled hair and funky dangling earrings. 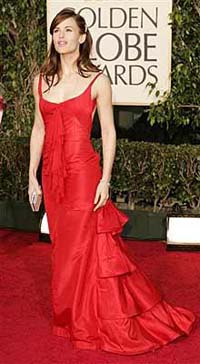 The red carpet-turned-runway at the Beverly Hilton in Beverly Hills, California, on Monday night was largely a sea of white with the glitz coming more from a smattering of metallic dresses and embellishment than from blinding diamond necklaces.

Among the stars who wore white to the black-tie event were Jennifer Garner in a beaded V-neck dress, Heidi Klum in a strapless gown and Kyra Sedgwick in a chiffon gown with amethyst crystal trim by J.Mendel that she picked straight from the catwalk. Salma Hayek was in a draped short-sleeve gown with an open portrait neckline; Ellen Pompeo wore a Versace high-neck gown with an open back and silver trim; and Kate Winslet was dressed in a strapless white Azzaro gown.

"It was amazing because of the beautiful white dress and Kate's incredibly white, milky skin. I asked, `What will make her look the most striking?"' said Pati Dubroff, Dior Beauty's makeup artist who worked with Winslet.

Dubroff said she imagined a 1930s screen siren in a black-and-white photograph. It is what led her to choose a plum-blackberry lipstick and platinum eye shadow.

Dubroff also worked with Naomi Watts, who wore a strapless turquoise gown with metal beadwork. Watts ended up with a sultry eye taking a cue from the metal in the dress and pink lip gloss to pick up on the vibrancy of the blue dress.

Cameron Diaz, with very dark hair and very red lips, wore a one-shoulder white fitted bodice with a skirt made of tiers of white tulle and a jeweled belt with a black bow. The tie trend also was spotted on Hilary Swank, who wore a fitted black spaghetti strap dress with a bow-tie waist, and on Jennifer Love Hewitt in a gold embroidered Georges Chakra gown with a bow waist.

Cate Blanchett wore a black off-the-shoulder gown by Alexander McQueen with lace sleeves, a delicate jeweled belt and an asymmetrical hem. Also stunning in black was Penelope Cruz in a scoop-neck Chanel Couture gown with a delicate ruffle around the neck.

"Gray was a gorgeous color because her eyes are so smoky and she has that smoky persona. It didn't seem fluffy or whimsical, she looked more of a serious classic Hollywood star. She looked like woman, not a girl," Lombardo said.

Since most stars played it safe, there were not any glaring misses, Lombardo noted, although she would have liked to see Katherine Heigl in something more playful than her very grown-up Escada black strapless gown with a fishtail hem and train. But, she added, the dress certainly showed off Heigl's voluptuous curves.

America Ferrara, star of the TV series "Ugly Betty," proved she could be glamorous in a draped gown by Brian Reyes in a deep indigo color. She told E! she liked it because it was "young and easy."

Sheryl Crow was in purple, too a strapless taffeta gown by Elie Saab. "I was looking for plum-colored Uggs," she joked, but opted for heels instead.

Jennifer Hudson took her spin in the spotlight in a navy V-neck Vera Wang gown with short sleeves, while co-star Beyonce wore a metallic plunging V-neck gown with a keyhole opening on the belly.

Jessica Biel shimmered from head to toe in a silver beaded gown with spaghetti straps and an open back.

Julia Louis-Dreyfus chose a cocktail-length gold lame dress by Carolina Herrera with a corset-style bust with coinlike beading. "I'm totally freezing, but it's worth it," said Louis-Dreyfus, reports AP.

She was not the only star feeling the chill of the unusually low temperature: Sienna Miller was shivering in her white Marchesa cowl-neck and cowl-back gown with gold embroidery in a lattice pattern.

Jennifer Lopez also wore Marchesa. Hers was a scarf-style, one-shoulder black gown. "My husband loved it. That's usually the deciding factor," she said.