Jennifer Aniston is rejoining Courteney Cox on primetime TV, but this time they are anything but friends. 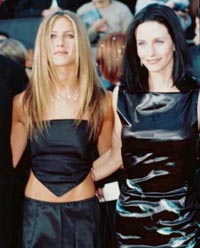 The episode, which airs March 27, marks the first time the two "Friends" stars have worked together since the popular, long-running sitcom went off the air in 2004, reports AP.

"Dirt" takes a dark look at the relationship between the entertainment industry and the tabloids as it follows Cox as the hard-charging editor.

Cox and her husband, David Arquette, are executive producers on the series with creator Matthew Carnahan and writer Joel Fields.