The original Snowzilla towered 16 feet (4.8 meters) over Billy Powers' yard in his east Anchorage neighborhood last winter. Now with snow piling up over the past week, Powers is resurrecting the giant figure, supersized. 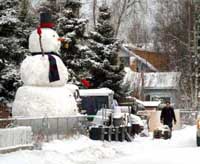 "It's a work in progress," said Powers. He expects to complete Snowzilla II by Tuesday.

Last year's version, with Alaskan Amber beer bottles for eyes, drew scores of photo-snapping crowds and TV crews from Japan and Russia before it melted in the spring.

Powers vowed to build the snowman again this year. But until last week, there wasn't enough snow.

"We were in trouble," Powers told the Anchorage Daily News.

Then came last week's snowfalls, which dumped 2 feet (0.6 meters) on the city.

By Sunday, Powers and some friends bundled up in layers of outdoor gear and got to work.

At the foundation of the new creation is a piece of the original Snowzilla. Last spring Powers' son Hunter put the last remaining chunk of the melted snowman in a plastic bag and tucked it in the freezer. That lump was ceremoniously used as a starting piece for the new Snowzilla.

A neighbor with a snowplow pushed drifts up to Powers' house for easy access. Last year neighborhood children lugged sleds loaded with snow, but doing most of the heavy lifting this year are Powers, Woolsey and Darrell Estes, who lives across the street, reports AP.

The men have craftsman backgrounds. Estes does custom upholstery, Woolsey is in construction and Powers is a welder. They get a kick out of creating the king of snowmen and are proud of their work.

"A snowman's good for everybody," Powers said.