New York airports: Paging the 100 millionth passenger of the year

A Taiwanese woman who arrived at John F. Kennedy International Airport on Wednesday was the 100 millionth passenger of the year at the region's three major airports. 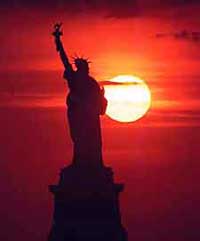 New York airports: Paging the 100 millionth passenger of the year

The Port Authority of New York and New Jersey, which runs the airports and other transit hubs in the region, said Liang Chen was the lucky 100 millionth traveler for Kennedy, LaGuardia and Newark Liberty International airports after taking a nonstop Cathay Pacific flight from Hong Kong. When she landed, she was greeted by Port Authority officials.

In honor of the dizzying distinction, she was lavished with gifts including airline tickets, hotel accommodations and tickets to a New York Mets game.

The three airports logged just under 100 million travelers last year. And they are on track to handle 104 million by the end of 2006, an increase of more than 28 percent in just four years, reports AP.

The new statistic caps a series of recent records for the three airports. Last year's traffic set one, as did the more than 50.6 million passengers who trooped through in the first half of this year. Newark's passenger count hit a new high of 34.2 million this weekend, surpassing a record set in 2000.

The passenger records are a measure of a rebound in air traffic since the airborne terrorist attacks of Sept. 11, 2001, which spurred a sharp downturn in air travel and led to airline bankruptcies.