Nearly 6,400 birds of 57 species were found to be living in the city's most famous park, according to the annual Christmas bird count by the parks department. 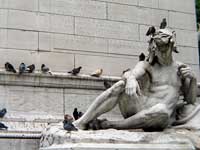 The one-day survey by teams of birding enthusiasts occurred last Sunday, for the 107th time since 1899. New York City Audubon led the effort with Central Park Conservancy as a co-host of the survey, which covered all 843 acres of the famed park in the middle of Manhattan, Department of Parks and Recreation Commissioner Adrian Benepe said.

Most of the birds were the usual suspects that inhabit or visit the park regularly rock doves, aka pigeons, herring gulls and common grackles. But this year's canvass turned up a few that Benepe said were rare or uncommon at this time of year a white-throated sparrow, a rusty blackbird, a tundra swan, a palm warbler, a kingfisher and two great blue herons.

The 75 to 100 spotters reported 20 sightings of red-tailed hawks, almost certainly including Pale Male, whose nest on a high-rise building facade facing the park has attracted bird enthusiasts and tourists for years.

Benepe said that in consultations the group agreed to cut the hawk count in half, on the theory that the soaring birds were being seen by several spotters at the same time.

The yearly count, designed as an alternative to hunting birds, was first conducted on Christmas Day in 1899 in Central Park and in Princeton, New Jersey, reports AP.