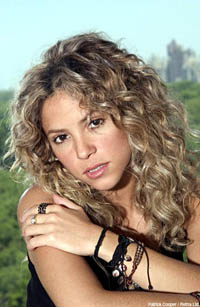 Backed by the Colombians and other luminaries of entertainment and finance, the Latin America in Solidarity Action whose Spanish acronym is ALAS, or "wings" took flight with a promise to tackle poverty that kills 350,000 children each year in the region.

Spanish singer Miguel Bose will serve as executive director of the foundation, conceived about a year ago by Shakira, who also heads the Colombia-based nonprofit foundation Pies Descalzos, or Barefoot, which helps the child victims of violence in that South American country. Both Shakira and Garcia Marquez hail from Colombia.

The ALAS promoters said the foundation does not pretend to replace other organizations that work with children or eliminate the obligation governments have to eradicate poverty, but to strengthen existing efforts.

"We all have to do our part to fight against inequality," Shakira said in a news release issued prior to the launching ceremony at the National Theater. The foundation will be based in the City of Knowledge, a former U.S. armed forces base near the Panama Canal that already houses academic institutions, high-tech business and nongovernmental international organizations.

"Latin America has some devastating statistics," added Garcia, citing the 350,000 children under 5 who die from causes linked to poverty, and the 40 million minors who work in the street.

One of the foundation's programs will provide health and nutritional assistance to pregnant women and children under 2, while a second program will try to enroll exploited and homeless children in school.

"The artists are building something different, with a vision and an interest in inclusion," said Nils Kastberg, a representative of UNICEF, which also backs the foundation.

The artists plan to hold five musical concerts, starting next year, to collect funds for the foundation.