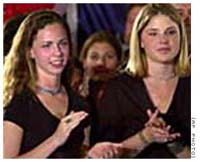 Jenna and Barbara Bush wore Boca's famed blue-and-yellow jersey as they watched the team beat Colon 4-1 from Boca's official skybox at the "La Bombonera" stadium along with 40,000 thousand screaming fans, including former Boca star Diego Maradona. The young women didn't salute the TV cameras that panned in on them sporadically during the game.

Boca has racked up more international team trophies than any soccer club in the world and needs only one more victory here to claim its third first-division championship in a row a feat matched only by Argentine rivals Racing Club and River Plate.

A week earlier, one of the twin's had her purse stolen while visiting Buenos Aires, garnering widespread public attention and dominating local TV newscasts.

On Sunday, the Bush daughters did not make any public comments and were kept far from fans and journalists seated below them at "La Bombonera," or the "The Chocolate Box," a box-shaped stadium with acoustics known for intimidating rival squads by boosting the roar of fans.

On the other side of the stadium, soccer legend Maradona watched the match from his own VIP box as fans raucously cheered, lit fireworks and threw blue and yellow confetti. Maradona was honored with the unveiling of a statue in his honor at the stadium before the match began.

Maradona is a fierce critic of U.S. policy in the region and joined a leftist protest movement last November, led by Venezuela's Hugo Chavez, opposing Bush's appearance at the Summit of the Americas at the seaside resort of Mar del Plata.

The Boca Juniors stadium is increasingly becoming a must-see stop for foreign tourists who have made this capital a top South American tourist destination since Argentina's economic growth in 2003 after a crisis the year before.

The Bush daughters have kept a low profile in Argentina both before and after the reported purse theft, reports AP.

Argentine officials confirmed that one of the twin's had her bag stolen Nov. 19 while touring the historic Buenos Aires district of San Telmo, but said the incident was not reported to police.