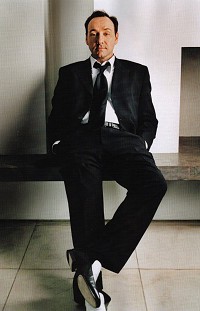 Spacey, who has appeared in several O'Neill classics on Broadway, will return next spring to star in a revival of "A Moon for the Misbegotten," portraying the failed alcoholic actor James Tyrone Jr.

The production, directed by Howard Davies, comes to New York after a triumphant run at London's Old Vic Theatre, where Spacey serves as artistic director. Until "Moon," Spacey's tenure at the Old Vic had been rocky, but the O'Neill revival, which will also feature London cast members Eve Best and Colm Meaney, may have changed that. It closes there Dec. 23.

Paul Taylor, writing in The Independent in September, called the London revival of "Moon" "beautiful, funny and cathartic ... The marvelous evening gives one the sense they have learned by past mistakes and may go on to a thrilling future."

The Times of London described the production as "a major triumph," while The Evening Standard praised Spacey's "electrifying displays of rage and sly shafts of comedy."

The 47-year-old Spacey first appeared in an O'Neill play on Broadway in 1986 in the Jack Lemmon production of O'Neill's masterpiece, "Long Day's Journey into Night." In it, he portrayed James Tyrone Jr., the same character he plays in "Moon."

Spacey's last Broadway appearance was in the 1999 revival of O'Neill's "The Iceman Cometh," also directed by Davies.

"A Moon for the Misbegotten" has had four previous productions on Broadway. Its initial Broadway run, starring Franchot Tone and Wendy Hiller, in 1957, closed after only 68 performances, reports AP.

But the play's reputation was cemented with a 1973 revival starring Jason Robards and Colleen Dewhurst and directed by Jose Quintero. It ran for over 300 performances.

Subsequent revivals have not been as successful. A 1984 production starring Kate Nelligan and Ian Bannen lasted 40 performances, while the 2000 revival, featuring Cherry Jones and Gabriel Byrne, chalked up a 120-performance run.