U.S. and Argentine media reported that one of President George W. Bush's 24-year-old twin daughters had her purse stolen while being guarded by the Secret Service during a visit here. 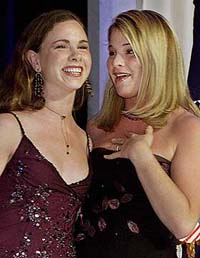 ABC News, citing unidentified law-enforcement reports, reported on its Web site Tuesday that Barbara Bush's purse and cell phone were taken while she was dining in a Buenos Aires restaurant.

La Nacion newspaper, citing anonymous government sources, said in its online edition early Wednesday that one of Bush's daughters had her purse taken Sunday afternoon in the popular tourist district of San Telmo.

A pair of thieves removed the purse from under a table while Secret Service agents stood guard at a distance, La Nacion reported. La Nacion said its sources did not reveal which of the Bush daughters was involved.

Argentine police told The Associated Press they had no complaint of any such incident on file, and the U.S. Embassy in Buenos Aires said it would have no comment. In Washington, the White House, Secret Service and State Department also declined comment, reports AP.

CNN cited a law-enforcement source who was briefed on the incident as saying that "at no point were the protectees out of visual contact and at no point was there any risk of harm."

Argentina's largest-circulation daily, Clarin, ran an online report citing the government news agency Telam as saying that Barbara Bush had her purse taken along with a cell phone that was inside it. Telam cited an official source who did not wish to be identified by name and who provided no other details.