Two polar bears at the Pittsburgh Zoo & PPG Aquarium should be resting easier these days. 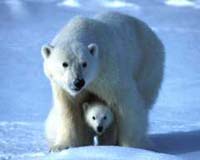 The zoo has unveiled a $14 million (Ђ11 million) exhibit for the animals that includes a waterfall, a freshwater stream and a 150,000-gallon (568,000-liter) pool chilled to between 50 and 55 degrees Fahrenheit (10 and 13 degrees Celsius). It also features a yard where they can play or nap.

The bears explored the exhibit for the first time Thursday. It is set to open for public viewing Wednesday.

The bears even have an air-conditioned cave, with a viewing window for visitors to peer inside. "The colder, the better," said Amos Morris, curator of mammals at the zoo.

Visitors can view the bears by walking along a path through a replica of an Alaskan fishing village. A tunnel that allows visitors to see the bears swimming will open in the spring. The zoo has space for five polar bears and may start a breeding program in a few years, reports AP.

They have been known as Koda and Nuka, but a contest is under way to rename them. Their new names likely will be announced in the next two to three weeks, said Connie George, a zoo spokeswoman.