Michael Jackson will perform "Thriller" from his famed 1982 album in a rare public appearance at the World Music Awards next week, organizers of the awards said Wednesday. 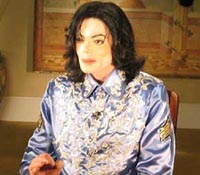 The 48-year-old reclusive pop star will receive a Diamond Award, given to artists who sell more than 100 million albums, at the industry ceremony on Nov. 15 in London.

The singer has spent time in Bahrain and Ireland since he was acquitted of child molestation charges in June 2005, making few public appearances.

In 1982, his album titled "Thriller," won a record eight Grammys and became one of the biggest sellers of all time. Along with the title track, it includes the songs "Billie Jean" and "Beat It." The album has sold over 50 million copies.

Jackson last performed in Britain in 1997.

Monaco hosted the World Music Awards for 15 years before the event moved to the United States in 2004 and 2005.