Barbra Streisand had a drink lobbed at her Monday after a mid-concert skit poking fun at President George W. Bush. 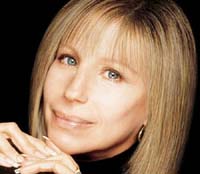 Streisand's publicist, Dick Guttman, said a paper cup filled with some sort of liquid was thrown on stage but apparently did not hit Streisand during her second performance in this Fort Lauderdale suburb.

Streisand's manager, Martin Erlichman, said she shrugged off the incident and responded to the angry audience member by saying: "It's a free country and they're entitled to express their opinion."

It is at least the third time the skit, which includes a George W. Bush impersonator, has angered Streisand's audience. A heckler targeted her at the Philadelphia opening of her 20-city comeback tour, Guttman said, and Streisand made headlines with her response to a jeerer at Madison Square Garden last month.

Erlichman said Streisand believed the skit was in good fun and noted impersonator Steve Bridges, who wrote it, is a Republican.

"This skit has been so massively covered by media, it's impossible that it still could come as a surprise to any of the Bush admirers who bought tickets," Erlichman said, reports AP.

Despite the controversy, Erlichman said the skit would remain a part of the tour.

"It stays in the show except for the few performances where Steve has a conflicting commitment," Erlichman said.

Streisand, an outspoken liberal, is touring the country after a 12-year absence from the stage, offering fans a repertoire of her four decades of hits.