Alec Baldwin wants off Schwarzenegger documentary he narrated, saying it goes too far

Actor Alec Baldwin wants to be removed as narrator of an Arnold Schwarzenegger documentary called "Running with Arnold," saying filmmakers went too far by including images of Nazi rallies. 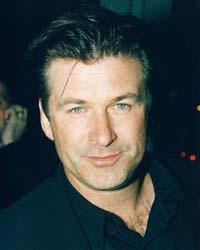 Alec Baldwin wants off Schwarzenegger documentary he narrated, saying it goes too far

Baldwin wrote in a posting on The Huffington Post Web site that he agreed to narrate the documentary about the actor-turned-governor's political rise based on a reading of the script. He said that when he saw the film as he recorded the tracks he was "somewhat dismayed by some of the images."

"The filmmakers hammer Schwarzenegger over his private behavior and his record as governor," Baldwin wrote, noting he is not a supporter of the governor. "But Schwarzenegger deserves to be treated fairly and the film's images of Nazi rallies were over the line."

Baldwin, who could not be reached for comment Monday, wrote that he asked that his voice be removed and said he returned payment. He also had his attorney issue a cease-and-desist demand against the filmmakers.

Producer Mike Gabrawy said Baldwin had the script for more than a month and that they tried several times to set up screenings with the actor, even delaying recording the narration to accommodate him.

The film includes a photograph of Kurt Waldheim, the former president of Austria, Schwarzenegger's native country, who was invited to Schwarzenegger's wedding but did not attend. In the photo, Waldheim is dressed in his World War II Wehrmacht uniform. In 1987, Waldheim was barred from entering the United States following an investigation into his activities as a lieutenant in a German unit associated with Nazi atrocities. Waldheim insisted he was innocent, reports AP.

Another image in the documentary shows the Nazi party paperwork of Schwarzenegger's father, Gabrawy said. Other images of the Third Reich have been replaced.

Gabrawy said he learned Baldwin did not want to be associated with the film days after the narration was recorded.

"What's really shocking about this situation is that this is not really a critical look at Arnold there's a lot more we could've done to be critical," said Gabrawy.

Gabrawy said distribution of the film was moving forward.