Islamic leaders on Monday banned Somalis from marrying without the consent or knowledge of their parents, saying such unions violate Islam. 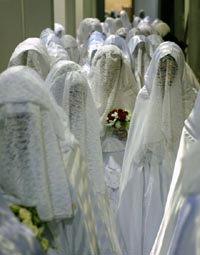 "It is against the teaching of our religion and parents do not approve of it," said Sheik Mahad Mohamed Sheik Hassan, chairman of the regional Islamic court in Wanlawien.

The edict was the latest step to impose strict religious rule as this chaotic nation emerges from more than a decade of anarchy. The group also has banned live music, the viewing of films and sports, and the use of qat, the leafy semi-narcotic plant, in areas it controls.

The marriage practice of "masaafo" roughly equivalent to eloping is common in Somalia because it allows young couples to wed without their parents scuttling the union because they deem the dowry too small or over other objections. Weddings also often cost up to a year's savings for an average Somali.

Mohamedek Ali, a 21-year-old Somali, said the costs were prohibitive and would prevent many marriages. "They cannot ban what our forefathers practiced," he said. "All of us, including the mullahs were born from elopement marriage."

Somalia has not had an effective national government since 1991, when warlords overthrew dictator Mohamed Siad Barre and then turned on one another, throwing the country into anarchy.

A transitional government was formed in 2004 with U.N. help in hopes of restoring order after years of lawlessness. But the government never asserted much authority. The Islamic movement which began in the 1990s seized the capital, Mogadishu, after fierce battles with secular warlords in June and now controls much of the country's south, reports AP.

The government controls just one town, Baidoa, 250 kilometers (150 miles) northwest of the capital.

The National Union of Somali Journalists said two journalists working for an independent radio station in Baidoa were arrested over the weekend. "We appeal to the leaders of the transitional government to end ongoing violations under their jurisdiction," said Omar Faruk, a spokesman for the group.