Rising opera star Salvatore Licitra suffered a rotator cuff injury getting out of a cab, but he did not let that stop him from singing the role that was Enrico Caruso's trademark even with his arm in a sling. 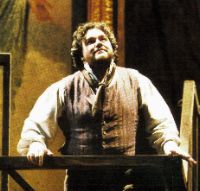 On Tuesday night, the 38-year-old Italian tenor ended up in a hospital emergency ward, instead of a Manhattan party thrown by Sony Classical in celebration of his latest recording, "Forbidden Love."

He had stepped out of a taxi in a narrow space between parked cars and went flying to the ground, left shoulder first.

He went to the hospital, where his bleeding leg was bandaged. He felt some pain in the shoulder, "but didn't pay much attention" until the next morning, when he woke up in tremendous pain.

An MRI and X-rays determined that he had torn tendons in his rotator cuff an injury more often suffered by baseball pitchers, not opera stars.

"But, how do the Americans say? `The show must go on,"' he told The Associated Press.

So on Thursday evening, Licitra appeared in Leoncavallo's "Pagliacci" as Canio, the clown who sings despite a broken heart. At the end, the role demands that he get very physical with his cheating wife, whom he stabs to death along with her lover, after kicking a table and throwing it.

Some changes were made in the stage directions to accommodate Licitra's arm.