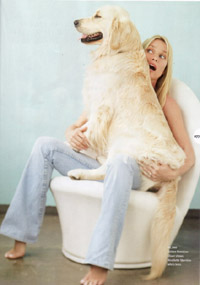 "This is not "Fear Factor," Sheridan said Thursday, balking at the idea of downing dog food.

Blair also declined, explaining she is a vegetarian. But "Little House on the Prairie" actress Melissa Gilbert and Ross the Intern from Jay Leno's "Tonight" show were game and scooped up helpings of doggie morsels.

Actor James Farantino was also on hand for the midday kickoff celebration dubbed the "doggy social event of the season."

Acid-tongued fashion critic Mr. Blackwell was on hand to applaud the best-dressed bow-wow and a pet psychic read paws.

The gathering celebrates the bond between man and dog by encouraging pet owners to share a meal with their dog, Van Patten said.

On Saturday, pet stores nationwide will be hosting special events to honor dogs big and small. Some sales proceeds from participating brands, including Natural Choice, will be going to animal shelters, Van Patten said.

"We hope to raise a lot of money for local animal shelters to continue their important efforts to give humane treatment to man's best friend," Van Patten said in a statement.