Conservative religious and political leaders rallied in opposition of gay marriage, arguing that their rights to religious expression are being threatened. 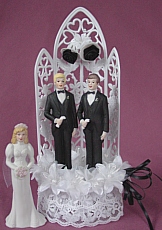 The event Sunday, broadcast to churches across the United States, is part of a larger effort to energize conservative American voters before the Nov. 7 congressional and gubernatorial elections.

"Here in Massachusetts, activist judges struck a blow to the foundation of civilization the family," Republican Governor Mitt Romney, a likely presidential candidate, told an applauding crowd of about 1,000 people, some of whom responded with "Amen."

Romney, during his speech inside Tremont Temple Baptist Church, criticized the state's highest court for its 2004 ruling legalizing same-sex marriage.

"What (the judges) ignored is that marriage is not primarily about adults; marriage is about the nurturing and development of children. ... Every child deserves a mother and a father," he said.

The Washington-based Family Research Council chose Boston for the site of its annual "Liberty Sunday" because Massachusetts is the only state that has legalized marriage for same-sex couples.

"When we look at what has happened with same-sex marriage, as it began in this state and threatens to spread across the country, we've seen in its wake the loss of religious freedoms and the ability to speak out based upon one's moral convictions," Tony Perkins, the organization's president, said Sunday.

Prompted by a ruling from its highest court, Massachusetts legalized gay marriage in 2004. Massachusetts lawmakers are expected to consider a proposed constitutional amendment banning same-sex marriage on Nov. 9.

David Parker, a speaker at the Boston event, was arrested last year after he refused to leave the grounds of his 6-year-old son's school after officials said they would not remove the boy from discussions about homosexuality.