Madonna and her husband filed adoption papers at a Malawi court Thursday, and a judge issued an interim order allowing the celebrity couple to go home with a motherless 1-year-old boy. 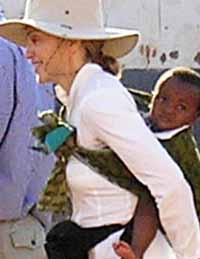 Assistant High Court Register Thomson Ligowe said Judge Andrew Nyirenda: "has just given out an interim order" that would allow Madonna to take David. The father, Yohame Banda, said he was happy for his son and pleased with the wealthy couple who wants to be his parents.

Madonna has made no comment to reporters since her arrival in this impoverished earlier this month, though she has made several public appearances in support of projects she supports here to care for AIDS orphans. Her publicist, Liz Rosenberg, said in an e-mailed statement Wednesday: "I am unable to make any official statement at this time" on the adoption reports.

Penston Kilimbe, director of child welfare services in the Ministry of Gender, Child Welfare and Community Services, had said earlier that Madonna and her film director husband Guy Ritchie filed adoption papers before a judge at the Lilongwe High Court.

"They have followed the normal processes. This has been going on for some time. Now this is the completion point," he said, reports AP.

Banda said he met Madonna and Ritchie at the court as part of the formalities. While they talked, Madonna, who has two children, carried the baby boy.

"They are a lovely couple," Banda said. "She asked me many questions. She and her husband seem happy with David. I am happy for him. Madonna promised me that as the child grows she will bring him back to visit."

Madonna arrived in the impoverished African nation Oct. 4 on a mission to helps AIDS orphans and amid rumors that she was to adopt a child.

Photo courtesy of The Sun.