Turkish writer Orhan Pamuk won the Nobel literature prize on Thursday, for his multitude of works that deal with the symbols of clashing cultures. 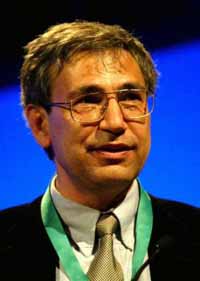 The Swedish Academy said that that the 54-year-old Istanbul-born Pamuk "in the quest for the melancholic soul of his native city has discovered new symbols for the clash and interlacing of cultures."

In its citation, the academy said that "Pamuk has said that growing up, he experienced a shift from a traditional Ottoman family environment to a more Western-oriented lifestyle. He wrote about this in his first published novel, a family chronicle ... which in the spirit of Thomas Mann follows the development of a family over three generations."

"Pamuk's international breakthrough came with his third novel, The White Castle. It is structured as an historical novel set in 17th-century Istanbul, but its content is primarily a story about how our ego builds on stories and fictions of different sorts. Personality is shown to be a variable construction," the academy said, reports AP.

In winning the prize, Pamuk will have his name catapulted onto the global stage, see out-of-print works returned into circulation and a sales boost. He will also receive a 10 million kronor (Ђ1.1 million; US$1.4 million) check, a gold medal and diploma, and an invitation to a lavish banquet in Stockholm on Dec. 10, the anniversary of the death of prize founder Alfred Nobel.