Angelina Jolie and Brad Pitt began shooting scenes for a movie about the life of slain journalist Daniel Pearl on Monday, said a crew member on the movie shoot in the western Indian city of Pune. 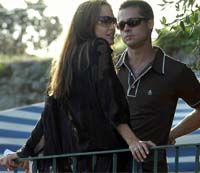 Security was tight around a spacious bungalow in the Pune suburb of Aundh, chosen because the area resembles Karachi, Pakistan, where Pearl and his wife Mariane spent time.

Jolie plays Mariane Pearl in the in the film, "A Mighty Heart," and Dan Futterman portrays Daniel Pearl. Both were involved in Monday's shoot, said a set manager who did not want to be named for fear of losing his job.

A street sign outside the bungalow has been changed to "Zamzama Fourth Street," and the height of boundary walls of adjoining cottages has been raised to replicate the area Pearl and his wife stayed in Karachi before Pearl's abduction.

The Wall Street Journal reporter was abducted and murdered in Pakistan in 2002 while researching a story on Islamic militancy.

Pune is about 160 kilometers (100 miles) south of Mumbai, India's financial and entertainment hub.

Television reporters, photographers and journalists have been camped outside the Pune hotel where the couple is staying and the bungalow since the stars arrived in India late last week.

Pictures of Pitt and Jolie with their son Maddox in an autorickshaw made the front page of India's national newspapers on Monday.

Their 20-minute ride in the three-wheeler rickshaw took them past shops and department stores in downtown Pune, reports AP.

The couple are in India with Maddox 5, Zahara, 18 months, and 4-month-old Shiloh Nouvel Jolie-Pitt.

The movie is based on an adaptation of Mariane Pearl's book, "A Mighty Heart: The Brave Life and Death of My Husband Danny Pearl," and will be co-produced by Plan B, a production company founded by Pitt and his ex-wife, actress Jennifer Aniston.