14:14
Kyiv's largest thermal power plant damaged in Russia's rocket attack
13:46
Kremlin: Russia must and will achieve its goals in Ukraine
13:15
Russian Defence Minister announces Ukraine's losses in November
19:39
Putin pays visit to Crimean Bridge two months after explosion
18:32
Russia strikes Ukraine's infrastructure facilities for 8th time
16:11
Retired US intelligence officer: Russia will win in Ukraine in summer of 2023
15:56
British mercenary: Winter cold in Ukraine came as a shock to us
15:31
Moscow responds to EU's decision to cap prices on Russian oil
14:52
As many as 2,500 dead seals found on the coast of Caspian Sea in Dagestan

Since Japan is a very small country with too many people inhabiting it, Japanese women often suffer from sexual harassment in public transport. The cases of men groping women or rubbing against them while traveling an overcrowded bus or a metro car are not rare these days in a city. 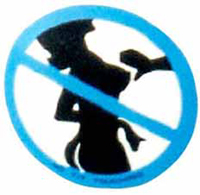 The overall number of reported groping cases in Tokyo dropped slightly in 2005, but authorities are worried by marked incidents of the attacks on a number of lines that introduced or increased women-only cars last year, police said.

"We've been calling on passengers to prevent such nuisances on trains with announcements and posters, but there were still victims and there were calls" for women-only trains, said JR East spokesman Yuichi Ogasawara.

Anonymous groping of women on Japan's crowded train lines has long been a social concern.

Passengers during rush-hour are often so jam-packed they are immobilized in a crush of bodies and victims have no way of escaping. Offenders can easily disappear into the crowd at the station.

A dozen train operators introduced or increased the number of women-only cars in Tokyo last year in hopes of providing some separation of the sexes on crowded lines.

The number of reported cases of groping and other lewd behavior toward women and girls - including secretly taking photographs - dropped in Tokyo from a record high 2,201 in 2004 to 2,137 in 2005, a fall of about 3 percent.

But the number of arrests on JR East's Chuo Line as well as Keio Corp.'s Keio Line, both linking eastern and western Tokyo, rose after adding women-only cars.

The groping arrests on the Chuo Line, which introduced women only cars last September, went up to 217 in 2005, the highest among all lines in the Tokyo area, from 188 in 2004, the AP said.

On the Keio Line, which first introduced women-only trains in 2001 for late night riders and extended the service to rush hours last year, there were 146 arrests in 2005, up from 122 the year before.

Of the 66 train lines linking Tokyo and neighboring cities operated by 16 companies, 26 lines by 12 companies have introduced women-only cars, according to Japan's national daily Asahi.

If convicted, gropers can face to up to 10 years in prison in most severe cases.