Campbell expected to play for Portsmouth 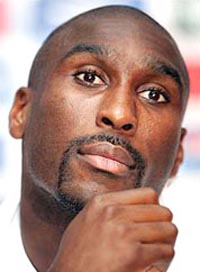 Campbell expected to play for Portsmouth

Campbell left Arsenal in July looking "for a fresh challenge" and attracted interest from Turkey's Fenerbahce.

Campbell, 31, made 197 appearances after joining the Gunners from crosstown rival Tottenham in 2001, the AP reports.

During Campbell's five years, Arsenal won five major trophies, including two league titles and three FA Cups. He has made 69 appearances for England and was a member of the national squad at the 1998, 2002 and 2006 World Cups.