Comedian Chris Rock hired an indicted Hollywood private eye to investigate a model in a paternity case, according to a published report. 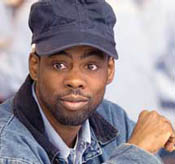 Anthony Pellicano was retained by representatives of Rock after Hungarian model Monika Zsibrita alleged in 1999 that the comedian was the father of her unborn child, the Los Angeles Times reported Tuesday.

The disclosure makes Rock the latest and arguably best known celebrity to seek the help of Pellicano.

The private detective was indicted in February in a federal wiretapping probe. He is accused of eavesdropping on Hollywood stars and using the information for threats, blackmail and in some cases to help clients gain advantages in legal disputes. Pellicano has pleaded not guilty.

Matt Labov, a spokesman for Rock, confirmed the hiring of Pellicano for the newspaper but did not immediately respond to an e-mail from The Associated Press seeking further comment.

"No one from our camp would have ever knowingly entered into an agreement with Pellicano to do anything illegal," Labov told the newspaper.

"Let me put it like this: When you hire somebody to fix your TV, you don't necessarily think he's going to hook you up for free cable," he said.

In the indictment, prosecutors alleged that Pellicano used his connections with a Los Angeles police detective to illegally run a background check on Zsibrita, 33, on July 30, 1999.

Rock was separated from his wife when he met Zsibrita. The outcome of the now concluded paternity case was unclear because it was sealed by a private judge.

Zsibrita, who now owns a computer business, declined to comment about the case or who was involved. In a brief interview, she said the indictment confirmed her suspicions that someone had been after her.

"They wiretapped me and they followed me around," Zsibrita said. "I was afraid. It was very unsettling."

Paul Barresi, a former Pellicano employee, said he was assigned to gather "dirt" on Zsibrita in 1999 and was told the job was for Rock. Barresi said he told Pellicano he found no evidence that she was involved in any criminal behavior.

Fourteen people have been charged in the Pellicano case.